Today is my best friend’s birthday.  We’re in our forties and that’s all I’m at liberty to say…lol.

We’ve been friends for over twenty years and what a couple of decades it’s been. She’s the godmother of my two sons. I am an honorary auntie to so many of her nieces and nephews. We’re family.

I remember when I came out to my parents. I’m sure they were thinking we were totally gay for each other. Alas, we were both totally gay for other people. That took some time for a lot of people to understand.

When she decided to leave school to become a tattoo artist, I was so pissed! We argued about it for a long time. I’d been a lackluster student before I found out Nikki was on the President’s List. My competitive juices kicked in and I earned a spot on the Dean’s List. She was my inspiration to give more of a damn. When she left school, I kinda lost my drive but that was my issue. When I learned that we didn’t have to be the same and do the same thing, it was liberating. I grew up.

Now after twenty years, it’s like we’re still two club kids gigging and laughing at funny people. When I need a shoulder to cry on or someone to punch me in the shoulder, I call Nik. If she needs to vent or have another set of ears, I’m there to listen.

You’ve survived two aneurysms, a psycho ex-girlfriend and our drug addled youth. You are the AWESOMEST MOFO I know. Without you, I would be totally bored and completely over most things. When we’re old and can’t hold our sphincters tight, we’ll laugh at that shit, too.

Love ya and look forward to our next face to face giggle session. 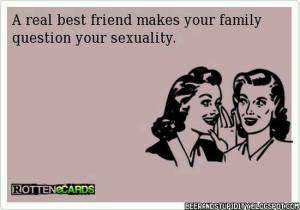 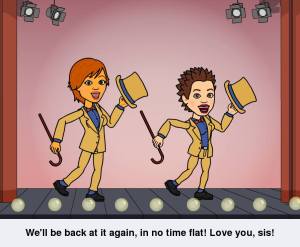